The theatre performance, ‘Holberg Ultimatum’, is a one man show based on the writings of Ludvig Holberg from all parts of his works.

Every statement, every word in the performance is Holberg’s own – it’s not a re-creation, no poetical re-writing, but shockingly actual material written by The Master himself nearly 300 years ago. 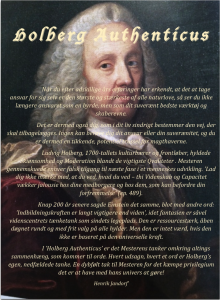 The performance played for sold out houses on The Holberg Museum, Tersloesegaard, and at The Court Theatre on Christiansborg, Copenhagen. Holberg himself enters stage to tell about his unique and remarkable life – he skewers pedantry and sycophants, he analyses satire and plays scenes from his own plays – and expresses an overriding hope for his future fellow citizens.

My interest in Holberg was seriously caused when I scoured the more unknown parts of his works and here found that he is so grotesquely contemporary! The very same mechanisms that back in his time made Holberg write his razor-sharp observations of mankind and society is existing to day!

The performance is ca. 1 hour og 15 min long. After a break I’ll have a talk about Holberg’s life, his motives and drive that led to his incomprehensible production with a striking and modern impact. It can play on theatres, libraries, auditories and smaller locations.

Some of the reviews (not translated) written about the show: